Dianne Pearce is the founder of The Milton Workshop (TMW), in Milton Delaware, also the home of Dogfishead beer~ Cheers! TMW meets twice a month at Dianne’s home and is in its 5th year. Finish your damn novel!

Dianne also runs mini weekend workshops for Devil’s Party Press designed to be a quick juice to the writing impulse. Currently they are done virtually, and are by invitation only. Contact her for more info: dianne@devilspartypress.com .

Working with the fabulous authors of TMW caused Dianne to imagine and create the publishing company, Devil’s Party Press.

She started the press because she believes that older writers are under-served in the publishing world, and deserve to have their work read.

She encourages all older writers to “Finish your damn novel!” and then contact Devil’s Party Press about publication.

The Press does not charge authors, and is not a vanity press.

Devil’s Party Press is named after John Milton, author of Paradise Lost, and the namesake of the town of Milton, Delaware. In his day, John Milton’s writing was considered so good and so scandalous that he was accused of being a member of the Devil’s party, and that is how the publishing company was named.

In addition to DPP, Dianne also runs imprints Hawkshaw Press, Out of This World Press, and Gravelight Press.

Dianne writes short stories and poetry. Her stories are quirky and compelling, with an immediacy to them that makes a reader feel that he or she must push on to the end. All her stories are 100% fiction, so readers should not conflate her stories with her life, as one can do with some authors. Her poetry is more personal, though is also not autobiographical. She writes in free verse, and the poetry makes magical and absurd twirls. In her poems Dianne works to transmit an emotion to readers that she has had, though the motivator for the emotion may not be the same as what appears in the poem. Dianne is finishing two damn novels.

Dianne earned her BA at Temple University. She is a graduate of both the West Chester University and Vermont College writing programs, earning an MA and an MFA respectively.

Dianne has taught writing at many colleges on both coasts. Some of these are UMES, SAC, UD, DTTC, & CCP.

Dianne presented at the 2019 Bay to Ocean Writers’ Conference. Her presentation was titled “Don’t Die With Your Story.” Dianne is available to present this again to other conferences.

Dianne has been a speaker and panelist at other writing events as well, most recently Frostburg U’s Indie Lit Festival.

Dianne has also presented to business groups like the women’s business group Polka Dot Powerhouse. Her presentation for them was titled “The Get Busy Living or Get Busy Dying Guide to Entrepreneurship.” Dianne is available to present this, or other talks, again to other conferences. Dianne once ran training for an SBDC in Pennsylvania, so she has solid experience with entrepreneurship.

Dianne has taught writing in Pennsylvania, California, Maryland, and Delaware. She is an insightful developmental editor (DE), and will often take on editing projects for other writers, and does the DE work for Devil’s Party Press.

Dianne has also done both writing and advocacy for causes close to her heart, among them adoption, developmental disabilities, and animals.

Dianne sometimes volunteers with the Mispillion Art League in Dover, Delaware, where her daughter has been fortunate to attend many fun and enriching art classes.

Dianne’s favorite writers include folks like Tom Robbins, Lemony Snicket, Raymond Chandler, Diane Wakowski, Sydney Lea, Agatha Christie, Caroline Keene, JK Rowling, Russell Hoban, Arnold Lobel, and Douglas Adams. A special thanks to author Stanley Charnofsky, who invited her into his writing group in Los Angeles, which helped Dianne to form her own when she relocated to DE, and which also taught her to love writing again.

Dianne is an adoptive parent of a wonderful daughter and also an admitted cat hoarder, but, sadly, has only one dog, a fact which she blames on her husband entirely. Check out her husband’s page as well: David (6 pets are enough) Yurkovich.

Dianne is a failed vegetarian (damn you sushi!) and also a failed gardener of vegetables (she does okay with flowers), but keeps trying all the same. Her favorite vegetables are the green ones, and her favorite color is the same.

Dianne is in a committed relationship with the semi-colon, Dave, and coffee. She is most proud of being an adoptive mom, a feminist in her fifties, inked (for her birthday in 2017!), and the founder of Devil’s Party Press.

Dianne is, above all else, a late bloomer. Late bloomers rock, and they deserved to be published. She hopes you are one too. Keep writing, and share what you write. “Don’t die with your story!” 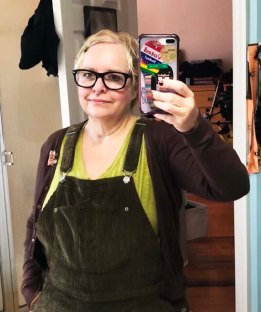